Who should write my video voice-over script?

Do you need a video voice-over script at all?

Before you decide on who’s going to write your video voice-over script though, you might want to consider whether a formal script is the best approach for you. If you’re telling a story then a scripted video works well, but what about a promotional video? Often an overly-scripted video can sound false or forced.

There are plenty of alternatives to a formal video script. With good editing you can achieve your goals using informal interviews, vox pops and visual imagery alone. The key is defining a clear business goal for your video, and then identifying the messages that you need to support this goal. Based on this you can then draft questions to ask people so that you get the responses (and the messages) that you want in a natural, conversational style.

We find that the very best ideas are developed together, and very often you don’t actually need a formal voice-over script.

Should you get the video production company to write it? 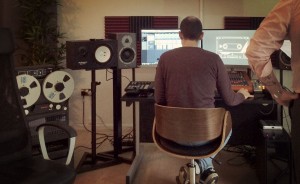 Capturing VO for ALUMNI association at Ithaca Audio in Brighton

Some of our clients come to us with a video script they’ve already written. More often though we meet, discuss ideas and concepts together and then they decide whether they need a voice-over script, and if they do, whether they want us to write it for them or would prefer to do it themselves.

On the one hand, writing your own script can save you money, and you know and understand your product or organisation better than anyone else. On the other hand, you can get so caught up in what you want to tell people that it’s easy to lose sight of what people actually want to know. It can also be hard to write in a suitable style if you’ve never done it before.

Personally, we don’t believe one approach is better than the other. We’re here make great videos, and so long as you’re open to feedback and creative ideas around the script you’ve drafted we can help you to do that.

If you do decide to write your own video script, here are a few things we can recommend from our script-writing process to help you:

When you’re happy with your first draft, check back to make sure your script meets all the criteria you defined for your video at the beginning of the process.  It might also help to look back at our post on The mistakes that kill video marketing campaigns (and how to avoid them).

Call us to discuss ideas for your promotional video